"Soaring With Destiny" is the real-life story, fully color illustrated with over 100 color photos and graphics, of a once-young man who followed the guidance of his Guardian Angel(s) through harm's way, while exposing him to challenges, and accomplishments, learning and gathering experiences that paved the way to ever increasing opportunities and future assignments. It

“Soaring With Destiny” is the real-life story, fully color illustrated with over 100 color photos and graphics, of a once-young man who followed the guidance of his Guardian Angel(s) through harm’s way, while exposing him to challenges, and accomplishments, learning and gathering experiences that paved the way to ever increasing opportunities and future assignments. It tells briefly of his early formative period as a child and shows how different pathways opened doors to successes along his career path; pathways that he never foresaw. After laying the ground work, the story begins with all-jet USAF Pilot training, followed by an “aborted” attempt to take what would prove to be a disastrous fighter assignment, and then latching on to the type of flying that many pilots have on their “bucket list,” flying a vintage WWII C-47 that was best suited to taking him on the assignments that were gateways to greater and greater opportunity for deep challenge, development of undiscovered talents, and high-magnitude benefits to the USAF during the Vietnam War, and the Cold War.

Chuck Miller’s story provides insights into the thrills of flying — both low and slow C-47 aircraft, and then flying Heavy-Jet tankers in global support of aircraft that were decades before their time in unmatched high performance far greater than the tankers that refueled them in flight. The story describes in detail the choreography of this high altitude and high speed “ballet” between two dissimilar performing aircraft. It then advances to his following high-level Special Category assignment as a NATO exchange pilot with the Canadian Armed Forces with the mission to train them in the arts of aerial refueling, and gaining sufficient Canadian national skills and proficiency to legitimately fulfill a realistic wartime NATO mission scenario.

The author skillfully interweaves the many activities of a twenty year USAF career, including continued involvement for another decade after retirement, and the deeper spiritual impacts and meanings of Soaring with Destinies path to a fun filled, and meaningful high contribution to the USAF mission and security of the United States during his career and far into the future.

This is the book for anyone who wants to know more about selected USAF aircraft and their flight charactersitics; non-routine ballet of leading-edge aerial refueling; about how skill and knowledge are the primary pathways to career and advancement; and about how flying brings the aviator closer to understanding the Spirit of life and achieving his Destiny. 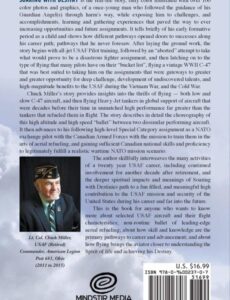