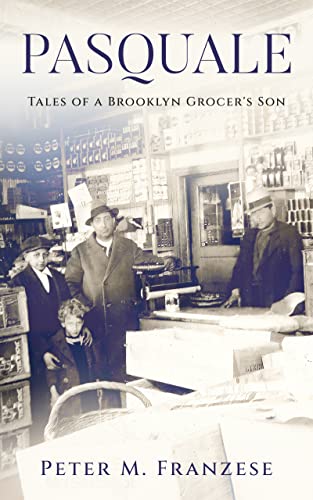 The story of the coming of age of the Brooklyn Grocer's Son and how on that one fateful night standing on Richardson Street, the click-clack of high heels striking the sidewalk turning the corner from Graham Avenue changed his life forever.

It is Christmastime 2016 and I am driving my eighty-nine year old grandfather over the Kosciusko Bridge into Greenpoint, Brooklyn. As I look over at him peering out of the windshield, I can see two spools of film playing in his head. One in vibrant color in which he could give perfect recall of all the events that had happened in his every-day life . . . and another . . . one in sepia tone, of him in pinstriped suits and fedoras, and driving his green 1946 Hudson around Greenpoint and Coney Island and Bear Mountain Park. He was always living in the present, but had the gift for total recall of the past to take you on that ride with him in old fashioned cars back into more idealistic times. As he stood in disbelief of all of the buildings torn down in his old neighborhood from his youth, here he stood, still vibrant, as a living testament to the real journey and the real struggle. There, standing by the Johnny pump where he played stickball as a youth in the 1930s with his neighborhood friends now all dead, he was a living time machine about to take you back to the days of trolley cars and vegetables sold from pushcarts in the street…when Graham Avenue was the epicenter of life and Saint Francis de Paola Church was the soul…and the gong from Saint Cecilia’s bell tower was your clock. It was the story of the coming of age of the Brooklyn Grocer’s Son and how on that one fateful night standing on Richardson Street, the click-clack of high heels striking the sidewalk turning the corner from Graham Avenue changed his life forever.

Born in Flushing, New York and raised in Richmond Hill and Deer Park, Peter M. Franzese is a fourth generation Italian-American. He holds a B.A. in Broadcast Journalism and M.S. in Secondary Education English from Hofstra University, as well as a degree in Mortuary Science from American Academy McAllister Institute. A former television news writer and educator, Peter is a funeral director in Long Island, New York, where he lives with his wife and daughter. His first book, Nettie: Tales of a Brooklyn Nana was released in 2004.

0 Ratings
Be the first to review “Pasquale: Tales of a Brooklyn Grocer’s Son” Cancel reply