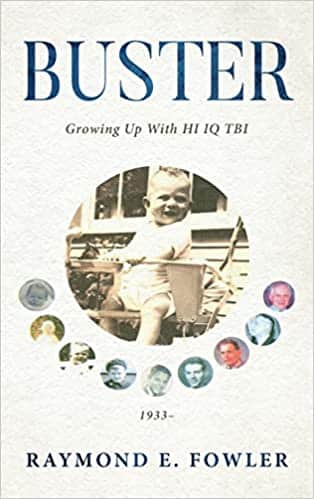 Best-selling and award-winning author Raymond E. Fowler (Buster) writes of the above tragic twists and turns that faced his parents prior to his infant traumatic brain injury and the doctor’s post TBI assessment that they would be responsible for raising a retarded child. Shunned by her husband’s German family, an infant’s death, and then an infant’s TBI due to her carelessness overwhelmed her. She fled only to return repentant determined to be a good wife and mother by spending years to prove the doctor’s wrong.

Despite School problems, UFOS, night terrors, building rockets and bombs, setting fires, ruining clothes, endangering children’s lives, and even shutting down World War II aircraft training exercises at a Naval base, she nevertheless persisted in doing her best to help Buster overcome the disability that caused them. Thankfully, she lived to see her hopes and prayers answered as Buster endured the twists and turns in his life that over time led to an extraordinarily successful life.

The book also is the author’s detailed telling of his everyday life experiences and what it was like for a misfit boy growing up in the 1930s in a tough seaport town during the great depression, World War II, and post war period. Those reading this book who lived during this same period are in for an enjoyable recollection of similar past events from their own lives. But, most important of all it will give hope to those parenting a child who has experienced a TBI and that despite its effects, it is possible that their child can be lovingly groomed to make the best of their life.

0 Ratings
Be the first to review “Buster: Growing Up With HI IQ TBI” Cancel reply